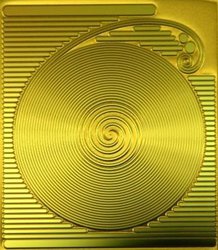 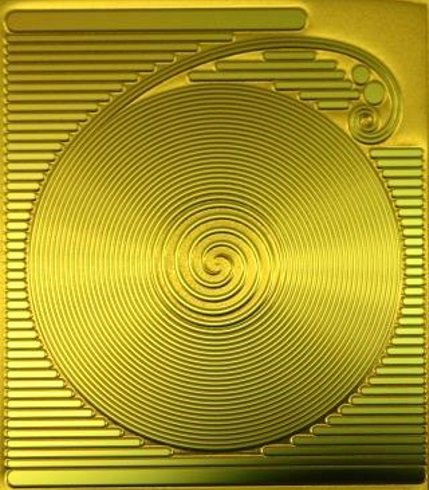 By closing the path of a ULL waveguide, a resonator is created. In this case, the large path length actually helps to increase the frequency stability of the resonator by calming thermodynamic fluctuations. We are studying a new type of resonator called a spiral resonator that improves the stability of lasers used for microwave generation [1]. 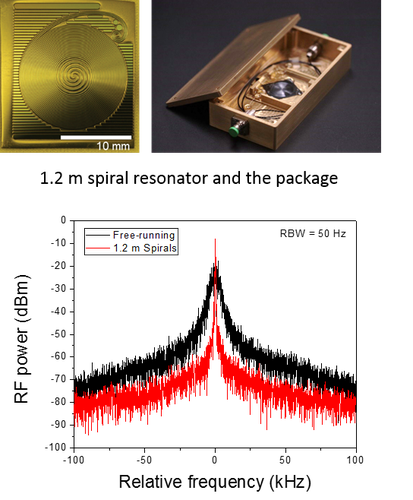 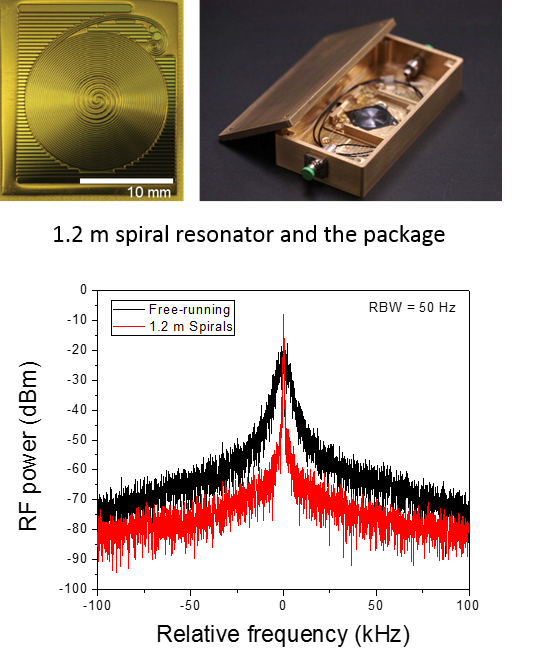 To make this possible, we have invented a new type of resonator called a spiral reference cavity [1]. A photomicrograph of the resonator chip is show in the upper left panel in figure 1. It consists of four, interleaved Archimedean spirals that create a single closed loop path for light (i.e., a resonator). What is unusual about this resonator in comparision to other chip-based devices is that it is intentionally designed to have a long round trip path length. The device in figure 1 has a path length of over 1 meter and we are developing devices with round trip path lengths approaching 10 meters. The Q factor of these devices remains high as the waveguides are ULL. However, by increasing the path length the light is much less sensitive to thermodynamic noise and the resonator makes a better frequency reference against which to stabilize lasers.

To verify the stabilizing effect of these resonators on lasers, we have independently frequency locked two fiber lasers to two of the spiral resonators. The particular fiber lasers used are among the most stable commercial lasers available and have a linewith around 1 kHz.  The experimental setup is in figure 2 and shows two, indpendent Pound-Drever-Hall locking systems. All of the optical signals are conveyed using optical fiber. To measure the stabilizing effect of the spiral resonators on the two fiber lasers, the laser outputs are optically combined on a single optical fiber and detected to produce a beat frequency in the detected photocurrent. This beat frequency in the photocurrent contains information on the relative stability of the two, independently locked lasers and is analyzed in three ways: electrical spectrum analyzer (ESA), phase noise analyzer (L(f) Analyzer) and also a frequency counter. This information is collected for the cases of the lasers locked and without locking (i.e. free running lasers). 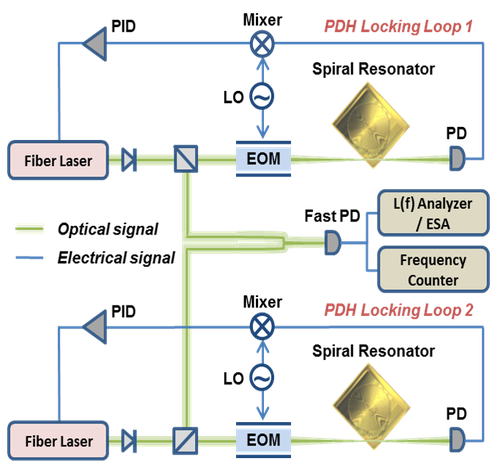 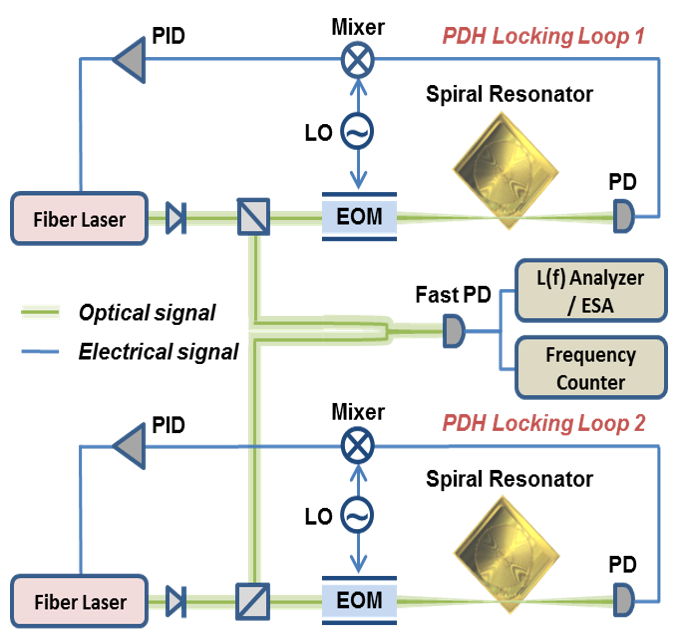 To illustrate how the spiral cavities perform, the lower panel in figure 1 shows the electrical spectrum (ESA) of the fiber laser beat frequency for the cases of locked and free-running operation. The spectrum shows a broad peak (unlocked lasers) and a narrow peak (two lasers locked to independent spiral resonators). The peaks are centered at zero on the frequency scale, however, the actual offset frequency between the fiber lasers is about 300 MHz. The result of this test is to show that the freely running lasers have a linewidth of about 1 kHz, while under locked conditions the linewidth improves to about 50Hz. Also shown in the upper right panel is a packaged reference cavity with fiber optic connectors. These systems will soon be sent to the National Institute of Standards and Technology in Boulder Colorado for incorporation into an OFD system.