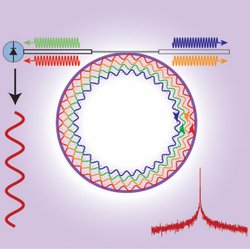 Acoustic phonons will interact with the intense lightwaves that exist in UHQ resonators. However, energy and momentum conservation require that resonator diameter (free-spectral-range or FSR) must be precisely controlled for this to happen. Because UHQ Disk resonator size can be precisely controled, this interaction can be engineered to be very strong. The result is a kind of laser action that produces highly coherent light waves in a compact chip-based package.

Stimulated Brillouin scattering (SBS) is an interaction between light and sound waves. In one version of the interaction an incoming photon (pump) scatters into a lower frequency photon (called the Stokes wave) by emission of a phonon (see figure 1).  SBS is infamous in optical fiber communications because it interferes with the integrity of lightwaves carrying information. Specifically, these lightwaves can unintentionally serve to pump the generation of phonons and the red-shifted Stokes wave by way of SBS. Energy and momentum are conserved in this process when the Stokes wave propagates exactly opposite to the pump wave. At the frequencies of light used in fiber communications (about 200 THz or a wavelength of 1.55 microns) the conservation laws are preserved by emission of 10.8 GHz phonons thereby producing a Stokes wave that is red shifted by 10.8 GHz relative to the pump wave. SBS can convert nearly all of the useful signal wave into the backward propagating Stokes wave if the signal power and fiber length product are great enough. 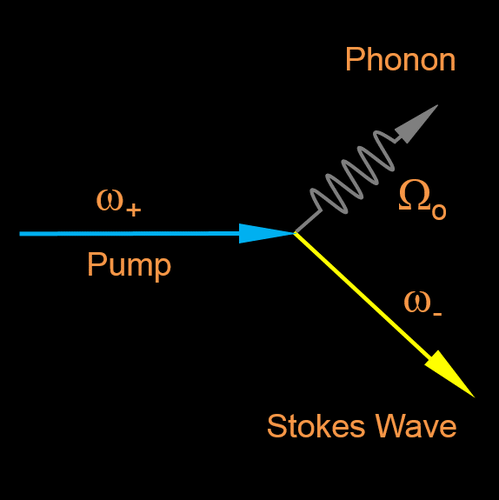 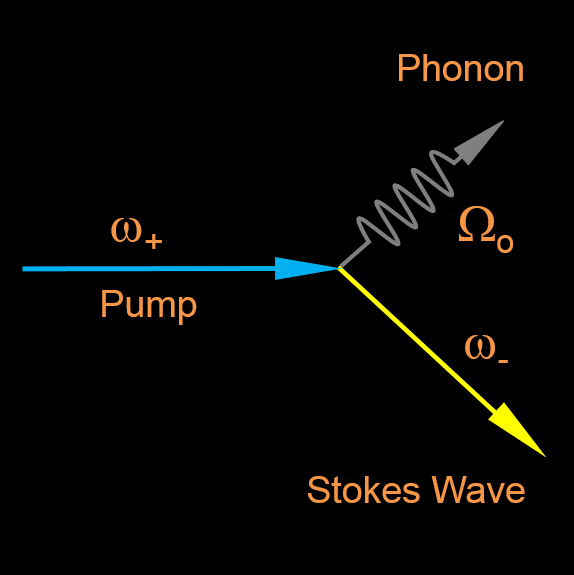 This same interaction can be made to play itself out in optical resonators. In this case the SBS process fuels laser action at the frequency of Stokes wave on account of feedback provided by the laser resonator. SBS laser action has been studied in fiber optical system for many years, however, it was only recently that SBS laser action was observed in optical microresonators [1,2]. The challenge in miniaturization of an SBS laser is related to matching the frequency of the phonon with the optical mode spacing of the resonator (the so-called free-spectral-range or FSR of the resonator). One must rely upon accidental matching of these frequencies unless there is precise control of the resonator size (which sets the free-spectral range). At the same time, this contol must also sustain the ultra-high-Q of the resonator or else the Brillouin interaction will be too weak.

The wedge resonators developed by our group provide this required UHQ and size control, enabling high-yeid fabrication of compact, chip-based Brillouin lasers [3,4]. The idea is animated in the figure 2. Two spectra are illustrated. The blue pump and corresponding Brillouin gain spectrum (shifted by 10.8 GHz) are fixed by the physics of the SBS process. This shift must be matched to the FSR (frequency spacing of the resonator modes) by adjustment of the resonator diameter so as to control the mode spectrum show in red. The correct matching requires about a 1:1000 control on a resonator diameter of about 6mm. This is easily obtained using our lithographic fabrication process. The process control is actually at around 1:10,000 so that very high efficiency devices are possible. 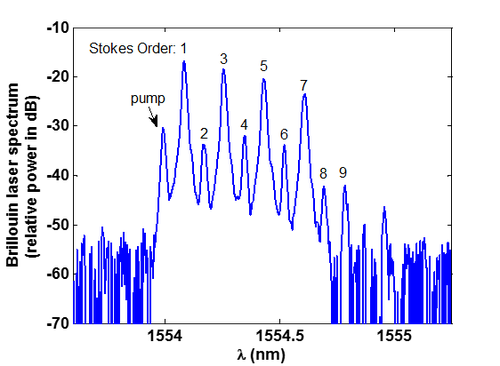 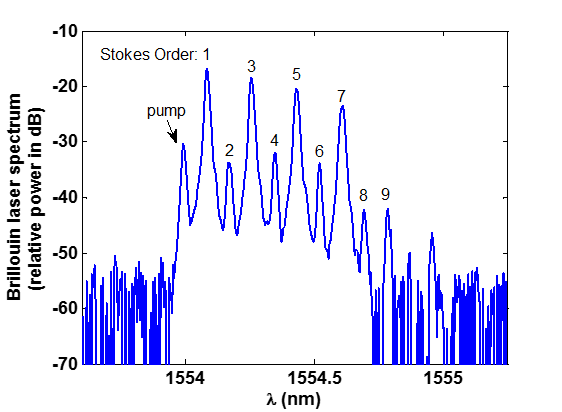 The resulting devices are over 90% efficient in conversion of optical pump power into laser power at the Stokes frequency. In fact, they are so efficient that once a Stokes wave begins to lase, it can also serve to pump the SBS process for a new Stokes and phonon fields. Measurements of the resulting cascading of Stokes waves is shown in the spectrum in figure 3. Here, the pump wave is at the extreme left and subsequent first, second, third - all the way to ninth-order Stokes waves are generated. All even-order waves propagate in one direction and all odd-order waves in the opposite direction.  The saw-tooth behavior in optical power of the various orders is an artifact of measuring the laser emission along only one direction of the output fiber.The challenge of making SBS lasers in compact packages pays off in several ways. First, because the interaction requires careful matching of mode frequencies with the phonon frequency, the laser mode spectrum is very uncluttered (i.e., no parastic laser modes). Even more important, the UHQ of the resonator guarantees that the linewidth of the Brillouin laser emission is extremely narrow. We have measured short term linewidths that are less than 1 Hz [4,5]. In terms of an effective Q factor, this means that the Brillouin laser lines have Q factors in excess of 1014 . This is an impressive number for a device so small. We are using this property of SBS lasers in several other projects, including work directed to the generation of stable microwaves (see Microwave photonics).