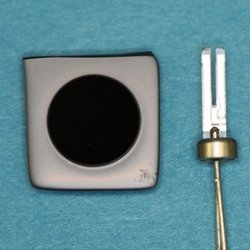 Electro-Optical Frequency Division (eOFD) is a new method for implementing Optical Frequency Division (OFD) that has similarities to the way that electrical frquency division is applied to stabilize high-frequency oscillators. However, the method reverses the conventional architecture for stabilization of an electrical VCO by electro-optically linking it to a higher-frequency, optically-derived reference frequency, as opposed to a lower-frequency reference such as quartz. This allows the method to leverage the high stability of optically derived references to stabilize a common electrical VCO.

As background to this section, it is helpful to read the section describing Optical Frequency Division (OFD). The idea of two-point locking [1] described there has inspired a third way to implement OFD that our group has recently demonstrated [2]. The idea is described in figure 1 and begins with two laser lines having a very stable frequency separation. In conventional two-point locking, these lasers would be used to stabilize two comb teeth in an existing frequency comb. In what we call electro-optical frequency division (eOFD), the frequency comb is generated from these lasers by phase modulation at a frequency determined by a voltage-controlled, electrical oscillator (VCO).  Upon phase modulation, each laser line generates a set of sidebands with a separation in frequency equal to the VCO frequency. The basic layout is shown in panel A in figure 1 where the dual frequency optical reference is shown at the top, followed below by the phase modulation (Optical divider) and finally at the bottom by the electrical VCO. 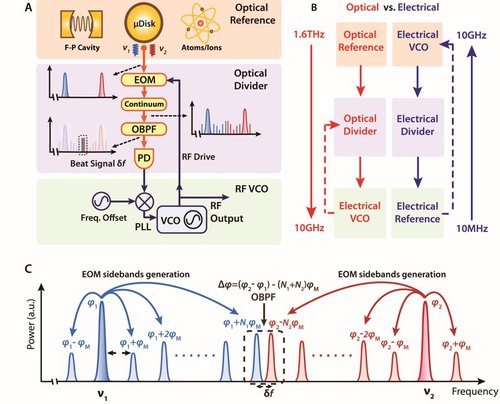 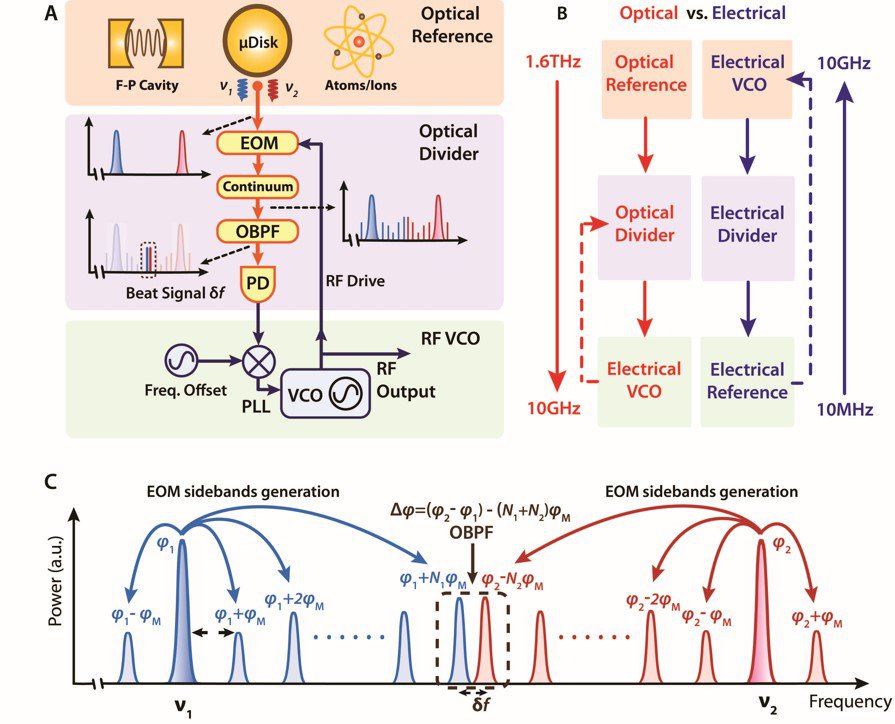 A spectral representation of the process is given in panel C of figure 1 with the two lasers lines at ν1 and ν2. For a large enough number of sidebands there will be two sidebands near the mid point of the frequency span between the two laser frequencies and having a separation in frequency that can be easily measured using a photo detector.  This detected electrical signal carries the phase information of the VCO (multiplied by the number of sidebands, N = N1 + N2, between the two lasers) and can be used to provide feedback control to the VCO.  When the feedback loop is closed, the net result is that the VCO acquires the relative frequency stability of the lasers divided by N. Since the relative stability of the two lasers can be very good and N can be large, the VCO stability can be greatly improved.

The actual implementation of this method is interesting in an architectural sense as it resembles a conventional electrical frequency synthesizer (see section on Microwave Photonics) except with the location in frequency space of the VCO and the reference oscillator reversed. The diagram in Panel B of figure 1 shows the idea. In the conventional electrical synthesizer, the VCO is divided down in frequency for comparison to a low frequency quartz oscillator. On the other hand, in eOFD an all-optical reference (the two lasers) is divided down using eOFD to stabilize the VCO. The advantage is that as noted in the section on OFD, optical sources can be orders-of-magnitude more stable than quartz so transferring this stability by eOFD in this new architecture has performance advantages over conventional electrical frequency division. Also, in comparison to conventional OFD, eOFD relies on relative stability of the optical reference as opposed to absolute stability. For reasons discussed in the section on Microwave photonics, relative stability is often more robust with respect to environmental disturbances. 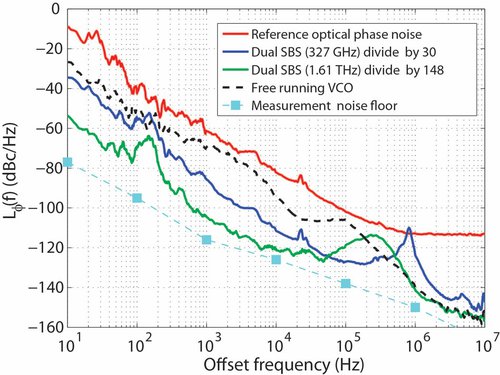 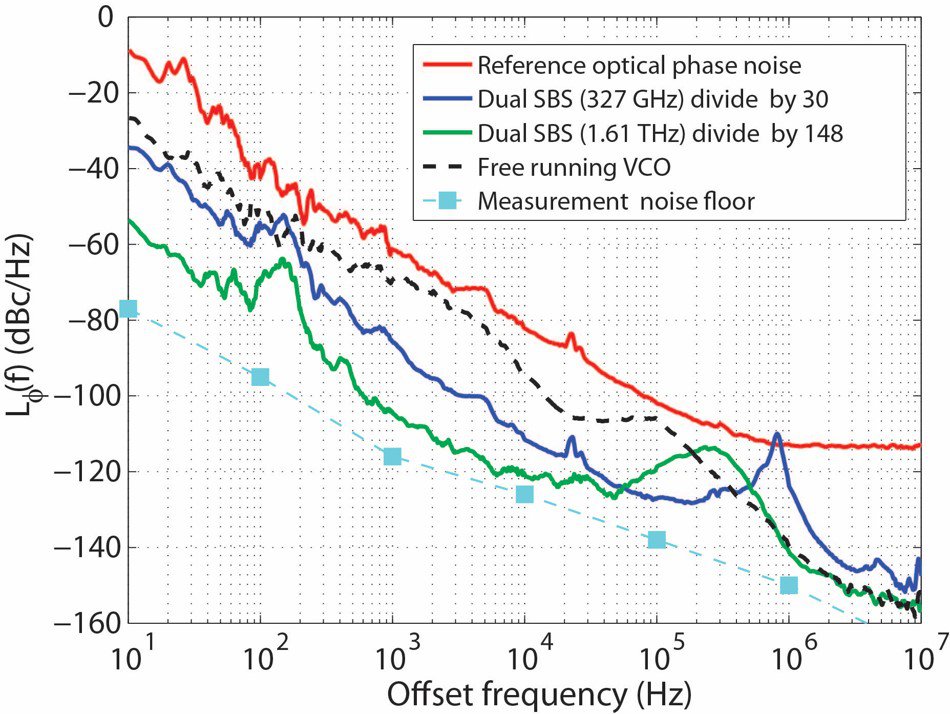