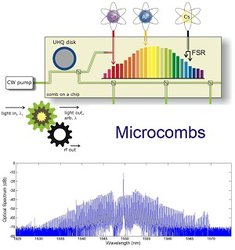 In UHQ resonators, a single frequency of light can generate a pair of other frequencies as a result of the intensity dependent refractive index (Kerr effect) of the resonator material. Through a cascade, these new freuquencies will generate other frequencies that are evenly spaced - very much like what happens in a mode-locked laser frequency comb (see Optical Frequency Division). These so-called frequency microcombs can potentially provide a way to miniaturize many of the applications of combs. We are studying ways to create stable frequency microcombs with detectable repetition frequencies.

Conventional frequency combs are remarkable devices that were part of the 2005 Nobel prize in physics [1].  At the heart of these devices is a special mode-locked laser that creates a large number of very evenly spaced frequencies. Through a technique called "self referencing" these frequencies can be stabilized and located absolutely in frequency [2-4]. One application of these devices is to frequency metrology where the comb of frequencies acts as an optical ruler. Another application relies upon the phase coherence of the optical lines and is called Optical Frequency Division and is the basis for a new clock technology called "optical clocks" [5,6] and for generation of microwaves with unprecedented stability [7]. Frequency microcombs or Kerr combs provide an alternative apprach to generate combs of frequencies using the Kerr nonlinearity in high-Q optical resonators [8].

The process of Kerr-comb formation in a resonator is animated in figure 1. As described in the section on Nonlinear Resonators, the combination of high Q and small size means that nonlinear optical phenomena can be generated at very low coupled power levels to a resonator. In this case, a certain power level input to the resonator causes parametric oscillation, an effect reported by our group and the Maleki group in 2004 [9,10]. In effect, two new frequencies (one higher and one lower) are created from a single input frequency (called the pump). After these new frequencies of light appear in the resonator, they will interact with the original pump light and among themselves through nondegenerate four-wave mixing to create even more optical frequencies. This cascade of frequencies forms a Kerr comb or microcomb [8,11], essentially the equivalent of the special mode-locked laser used in a conventional frequency comb. There is presently intense focus directed to demonstrate "self-referencing" of these microcombs. As noted above, self-referencing is a critical step for their practical application as it allows the comb lines to be locked in frequency space in an absolute sense. Because the physics of microcombs differs from standard frequency combs, there are interesting challenges along the way to achieving this result. We are systematically tackling these challenges using UHQ wedge resonators [12]. These resonators provide several important advances for control of comb formation and also for realization of comb repetition frequencies that can be directly interfaced to electronics. 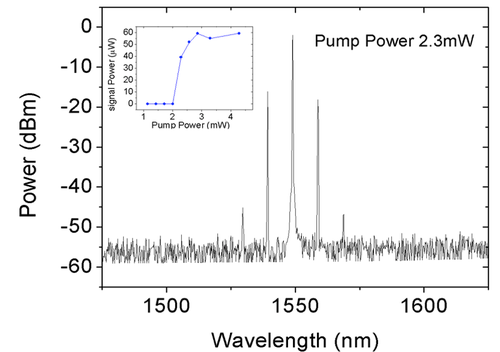 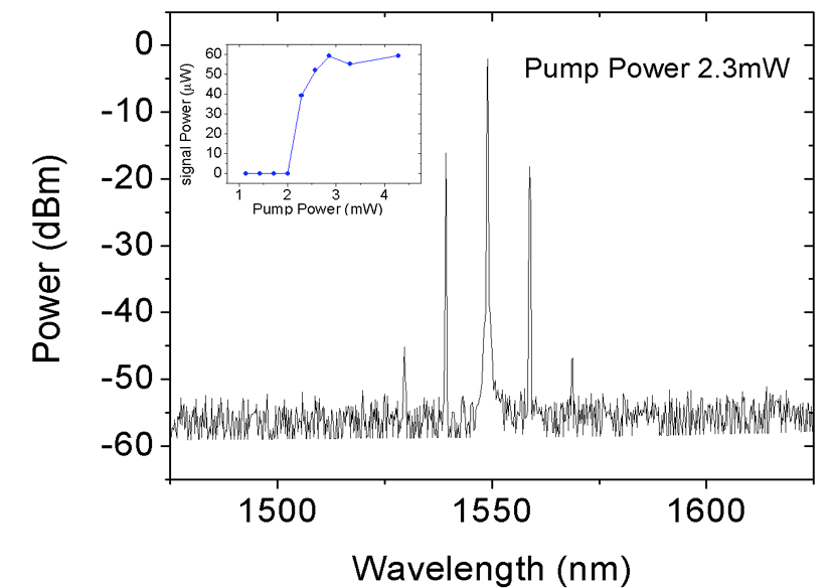 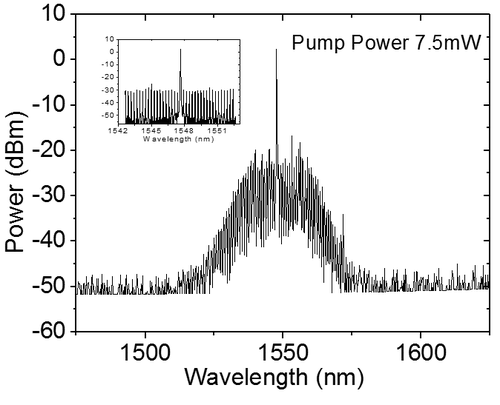 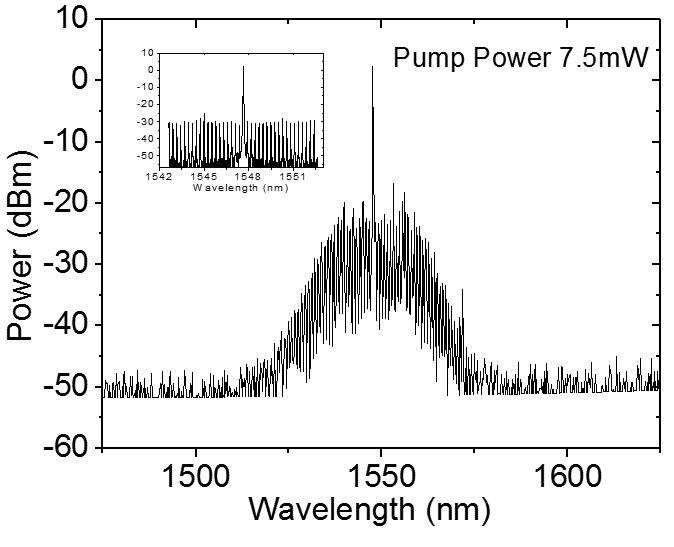 Figure 2 shows the threshold of parametric oscillation in a UHQ disk resonator at a pump power of 2.3 mW. This represents the onset of comb formation. With increased pump power to 7.5 mW, non-degenerate four-wave mixing (FWM) occurs (see Figure 3) and the comb "fills-in" with new frequencies and grows. Ultimately, with further increased pumping the comb continues to grow in width spectrally and fills-in until resonator dispersion begins to constrain its growth.

The comb spectrum in figure 4 results by continuing to increase pumping power to a level of 200 mW. The comb of frequencies shown contains over 2000 comb lines separated by about 22 GHz. Besides achieving wider comb spans (to levels exceeding an octave of optical frequency) an important challenge to frequency microcombs is an inherent instability in the way the comb grows. These two features (width and stabliity) must be addressed if microcombs are to achieve their full potential.