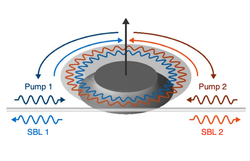 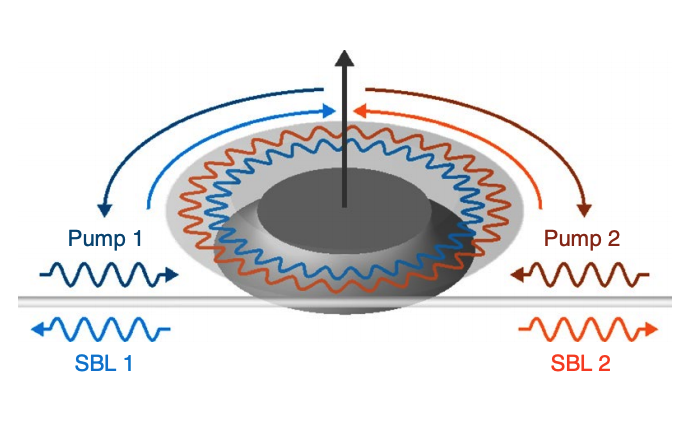 Optical gyroscopes are rotation measurement devices based on the Sagnac effect. They are the backbone of many navigation systems used in commercial and military aerospace systems. Chip-based optical gyroscopes can provide reduced footprint and extraordinary performance in harsh environments. Our chip-based microresonator gyroscope uses silica as a gain medium to generate counter-propagating stimulated Brillouin lasers. These lasers sense the non-reciprocal Sagnac shift under rotation. The device performance is demonstrated by measurement of the Earth's rotation. This gyroscope paves the way towards an all-optical inertial guidance system that is both rugged and whose manufacturing process is scalable.

Counter-propagating lightwaves within a closed rotating loop experience different round-trip propagation times as a result of the Sagnac effect [1]. Modern optical gyroscopes enhance this difference using long coiled optical fiber paths (fiber optic gyroscopes [2]) or by recirculation using active resonators (ring laser gyroscopes [3]). With the advent of the integrated photonics, there has been interest in creation of chip-based optical gyroscopes. Such integrated optical gyrocopes could enjoy the advantages of integration and scalable manufacturing. They would also be extremely robust and rugged for operation in environments that are challenging for existing microelectrical-mechanical (MEMs) gyroscope systems [1]. For these reasons, there has been intense interest in chipbased Sagnac gyroscopes. Compact or chip-based ring laser gyroscopes [4, 5], passive resonant gyroscopes [6–9], and interferometric gyroscopes [10] have recently been reported.

Here, we demonstrate an offset counter-pumped stimulated Brillouin laser (CP-SBL) gyroscope using a 36mm diameter silica wedge disk resonator [11] (Fig. 1a). By pumping the resonator from both directions, the Brillouin phase matching condition [13] allows generation of counter-propagating SBLs within the same cavity mode (Fig. 1b). This near-degenerate mode of operation offers improved stability and low-frequency (audio-rate) readout through photo detection of the CP-SBLs. However, back-scatter induced locking creates a rotation dead band similar to that observed in commercial (non-chip) ring laser systems. Here, we show that nonzero pump detuning in the range of 1 MHz (∆νp) introduces dispersion from the Brillouin gain that pulls the CP-SBL modes apart to unlock the gyro readout (∆νs) (Fig. 1c). The gyro readout beat frequency has a sub-Hertz linewidth because of the high optical Q factor of the resonator [13, 14]. Moreover, co-lasing of the clockwise and counter-clockwise Stokes waves suppresses common-mode drift in the beat signal [13]. The Allan deviation of the gyro shows 0.068◦/ √ h angular random walk (ARW) and 3.6◦/h bias stability when using a 36 mm diameter resonator. A smaller diameter resonator (18 mm) was also measured to characterize the effect of resonator area and mode volume on performance.

We also tested the performance of the CP-SBL gyroscope by applying an external sinusoidal rotation similar to the configuration in Ref. [4]. The gyroscope achieves a rotation amplitude sensitivity as low as 5◦/h (Fig. 2a). In addition, by applying large rotation amplitudes, we confirm that the dispersion from the Brillouin lasing process introduces an additional mode-pulling correction factor to the conventional Sagnac factor (Fig. 2b). As a additional test, the Earth's rotation was measured by switching the gyroscope axis between North and South directions (Fig. 2c). As a control test, the gyroscope axis was also switched between East and West directions to verify no rotation. This is the first time that the Earth's rotation has been measured using a chip-based optical gyroscope. Our results are encouraging for the development of chip-based Brillouin laser gyroscopes in inertial guidance systems.