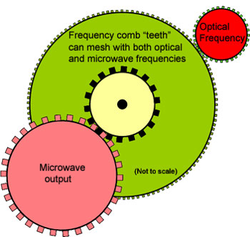 Optical Frequency Division (OFD) is a revolutionary concept first demonstrated about a decade ago at NIST. It will be used in the next time standard ("photonic clocks"). We are implementing OFD using frequency microcombs and also studying a technique we developed called electro-optical frequency division (eOFD).

Frequency division is a common process used in electronics to convert a sinusoidal signal at an initial frequency into a lower frequency signal that is a factor N-times lower. The process is critical in modern electronic frequency synthesizers since it allows the generation of a whole range of signal frequencies by division at controllable and varying factors of N. As described in the section on microwave photonics, the ability to divide a high frequency signal into a lower frequency signal also enables high frequency microwave electronics to benefit from the remarkable frequency stability of quartz crystal oscillators. Also, the modern technology of time keeping is based upon the idea of dividing a very stable high frequency down in value to 1 second [1]. For example, wrist watches use tiny quartz tuning forks that oscillate at 32,768 = 215 Hertz as the reference for the second. 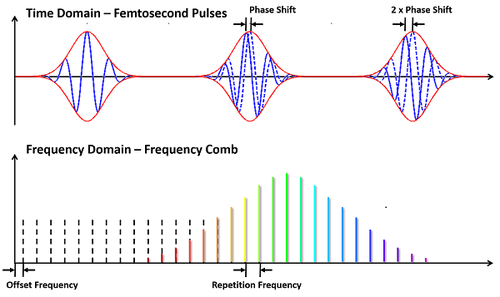 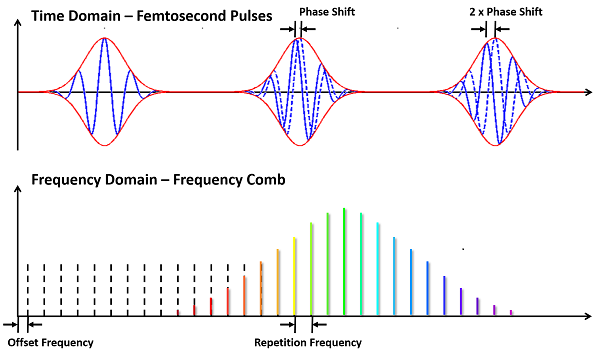 How the frequency comb is created is a subject better left to one of the seminal papers on combs [3-5]; however, figure 1 gives a rough idea of how optical frequency division (OFD) is performed once one has an operating frequency comb. A visualization of comb teeth in an optical spectrum is presented in the lower half of figure 1. In principle, if the comb teeth extended all the way to the origin (they do not of course), the final comb tooth would be offset from the origin by an amount called "the offset frequency". Through a very clever technique that is part of how frequency combs are stabilized, it is possible to measure this "offset frequency" and to stabilize it to a radio-frequency signal. Now suppose that in addition to stabilizing this imaginary lowest frequency comb tooth, we also stabilize one of the actual comb teeth to a very stable laser. Such lasers are themselves actually stabilized to some other reference such as a cavity, an atomic transition or both. The net effect is that the comb spectrum is pinned, if you will, in frequency space at two ends.

How to detect this improved stability signal is quite easy as the combined comb teeth produce pulses at a repetition frequency that is set by the free-spectral-range (FSR) of the comb (upper half of figure 1).  The phase relationship of these pulses relative to the original locked comb tooth is shown in the figure. A little math shows that it is fixed once the offset frequency is fixed. In fact, if the offset frequency is zero, then this phase shift is also zero. The net effect is that pulse envelopes are now phase synchronized with the optical field of the laser used to lock the comb tooth - an optical to electrical frequency division has therefore been accomplished! In short, it is possible to coherently link an electrical signal to the electrical field of a laser that is locked to one tooth of the frequency comb. 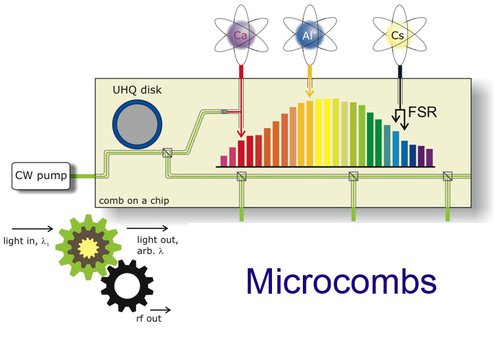 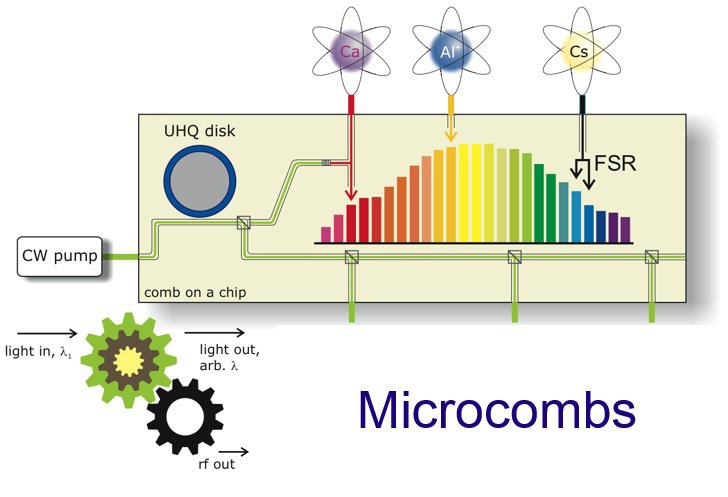 This feature of frequency combs to perform OFD has taken on immense importance over the last years because the overall stability of optical oscillators (lasers locked to cavities or to cavities and atoms) greatly exceeds the stability of electronic oscillators and even microwave oscillators based upon locking to micowave atomic transitions (atomic clocks).  As a result an entirely new clock technology has been invented in the last 12 years (optical clocks [6]) that are around 100x more accurate than anything that has come before [1]. Also, the most stable microwave signals are now generated by this process [7]. We are interested in using the new technology of frequency microcombs to implement OFD methods on a chip (see figure 2) and are collaborating with the Diddams group at NIST, the leading group on comb and clock technology.

At the same time, there are also other ways to implement OFD that use a fraction of the comb spectrum. These can be advantageous because they relax the requirements imposed on the new technology of microcombs. One method is called two-point locking and was first demonstrated by Nate Newbury at NIST [8]. In two point locking, a narrow comb spectrum is generated and two (as opposed to one) of the actual comb teeth are locked to laser sources that have a high relative frequency stability. This relative stability then sets the stability of the tooth-to-tooth frequency spacing. As a result, if the comb spectrum is detected, the electrical signal determined by the comb-tooth line spacing will be stabilized by the two-pont lock. Importantly, the frequency fluctuations between the two, locked teeth are divided over the frequency span between these teeth so that the absolute stability of the tooth-to-tooth separation is N-fold better than the orginal lasers. Therefore, if one can find two laser lines or two atomic transitions with a high relative stability, then the two-point locking will transfer this stability to an electrical signal. This idea was recently implemented by the Diddams group at NIST using a frequency microcomb developed in our group [9]. The atomic transitions employed were from the atom Rubidium. The two point locking approach is also used in electro-optical frequency division (eOFD) [10].